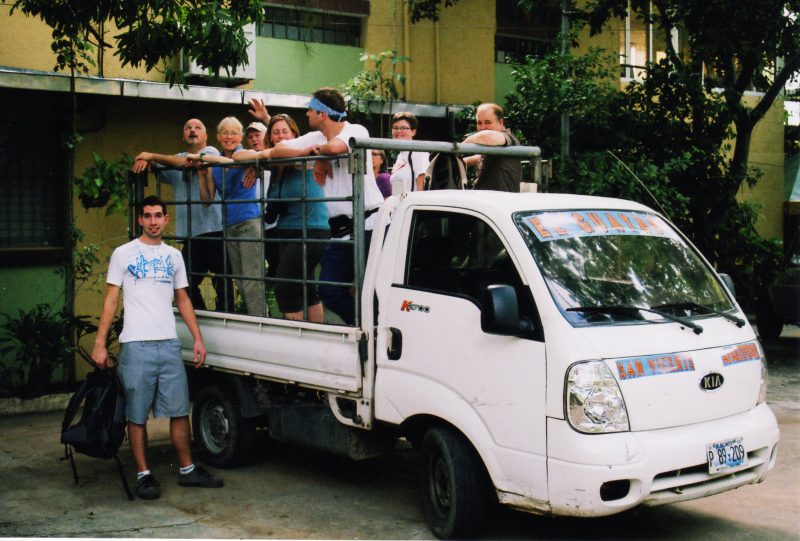 When our team touched down at the San Salvador airport in November 2008, a blast of furnace warm air greeted us as we walked up the covered walkway to the airport lounge. This was our group’s first time visiting the Central American country of El Salvador. We were here on a mission’s trip for the next eight days to construct metal houses for four deserving families.

The next day I was ecstatic to discover that we would be traveling just as the locals do, riding in the back of small pickup trucks, to and from our work sites. Climbing into the back of the truck transported me back forty to fifty years, when as a child growing up in Glenrosa, our neighbour, Maise Shetler, drove us kids during the summer to swimming lessons at the Westbank Aquatic public beach on the shore of Okanagan Lake. I cradled the four-pound honey tin on my lap. The tin was filled with home made cheese and cucumber sandwiches or jam and peanut butter sandwiches, with mother’s wholesome homemade bread. We careered down Genrosa Road, a dirt road at the time. The towering dust clouds emanating from the rear wheels mesmerized me, as they rose skyward and curled into each other. The faster we went, the more voluminous the dust clouds became. I loved the adrenaline rush that resulted in those five or six mile drives to the beach.

When the well used medium blue 1949 or ’50 Chevrolet pickup turned left down the paved Highway 97 towards town, we occasionally stood up in the box, poking our heads above the cab, or lean out from the box sideways, to catch the full force of the air pressing into our faces, momentarily preventing us from breathing. We quickly realized that we could only sustain the immense volume of air hitting our mouths and nostrils for short periods of time before quickly ducking down or popping back behind the cab, to catch our breath. This was typical of life for me as a child back in the late 1950s to late sixties.

In the summer of 1963 I hounded my parents, my mother in particular, to allow me to spend eight days at Morning Star Bible Camp. The camp was only a half-mile down the road from where I lived and utilized several large military tents that were mounted on top of crude wooden platforms. Rows of bunk beds with straw tick mattresses were used to house the campers. I loved the atmosphere there, meeting kids from other parts of the province, lining up outside the dining hall for meals and attending chapel services.

One of the key attractions for the kids at this camp was that they had an enormous swimming pool. Well, one day our counselors broke the sad news to us that we couldn’t use the pool anymore because there was a crack in the concrete and the water was slowly leaking out. As a result the camp leaders decided that all the kids, along with some of the counselors, would be transported to the lake in the back of Mr. Campbell’s 3-ton red and black Chevrolet stake truck. The children and counselors were boosted into that truck, and told to stand. Those of us holding onto wooden boards of the sides were the anchors for those in the middle holding onto us to give them support, as we drove down the dusty gravel road, singing ‘I’ve got the joy, joy, joy, joy down in my heart’ and other songs all the way to the Westbank Aquatic to have our swim. There must have been forty or fifty people in the back of that truck.

Later that week, the camp directors decided that we would go on a picnic up to Carre’s Meadows, a wilderness area about three miles up the road from our camp. Again, that same truck was pressed into service to transport all of us there and back.

In those more or less, carefree days that is how things were done to transport people from point A to point B. Decisions were made pragmatically, by implementing the most practical and cost effective method with the least amount of effort. Sure, the safety issues of transporting people, especially children, in the back of a moving vehicle, were considered, and children were cautioned to hang on tightly. Most people paid little, if any attention to the ‘what if we get into an accident’ scenario, or if little Billy or Susie gets injured, will we be sued by the parent’s insurance company?

Another factor that played a significant role in this mindset was that there were fewer people living in our communities or neighbourhoods in the 1950s and early ‘60s. Only sixteen families lived in Glenrosa during that time and we knew every member of those families, where they lived and what their parents did for work. When we walked home from school after the school bus dropped us off at the bottom of Glenrosa Road, if a parent happened to be driving up the road and stopped to pick up their children, we all piled in to their car or truck and got a ride as far as they were going. That was just natural, courteous and acceptable behaviour. No parent would even think of just picking up their children and leave the other kids to walk home.

Before seat belt and children’s car seat laws were enacted, courtesy and common sense prevailed. We just piled in to the vehicle, sat on kid’s laps, and no matter how many people there were, there always was room enough for everyone.

Did the unregulated privilege, back then, of transporting people in the back of trucks and carrying more passengers than the number stated by the automobile manufacturer get stretched and even abused? The short answer is yes. From my observations, however, the incidents that occurred were infrequent. On one such occasion, our neighbour, a teenager at the time, was heading to George Pringle Secondary School and on an impulse stopped at our Highway 97 bus stop. We (about ten of us) piled into his foster parent’s ’55 Plymouth station wagon. As the last child squeezed in before the door was slammed shut, the bus sped by. We took off and sped down the highway with the engine screaming, and passed the bus as we dipped through the Powers Creek fill in. Sam beat the bus to the parking lot at Westbank Elementary School. Elated that we beat the bus to school, we spilled out of the car to brag about our accomplishment. Thinking back on that incident today, I realize that it could have gone horribly wrong, and had there been an accident there may have been severe injuries and even loss of young lives. The consequences would have been felt for a lifetime.

I arose early on that first morning in San Vicente, El Salvador and strolled through the open tall iron gates to watch the convoy of cab over trucks racing up the street with around twenty or thirty sugar cane workers standing in the back, hanging onto the railings. For them this trip was repeated twice each day. For these workers, who earn $2.00 each day, and have no hope of owning their own vehicle, this is their only mode of transportation.

Shortly afterwards, two small Japanese pickup trucks arrive at our hotel. We hopped into the back; each person finding a comfortable spot to sit down and off we sped to the pastor’s house for breakfast.

As we drove down the busy streets, that exhilarating feeling I had as a youth, flashed back to me. The open-air experience, hearing the street vendors, the sound of cars, horns, music playing and people talking made me feel alive and an integral part of the local scene.

Incidentally, the city of San Vicente has no traffic lights, no traffic circles and very few yield and alto (stop) signs. As you travel down a main street or thoroughfare, the driver has the right of way and toots his horn as he approaches an intersection to warn other drivers waiting at that side street that he is coming through. This rudimentary traffic system seems to be effective, the city drivers understand and adhere to these simple rules of the road here.

Whether you agree or disagree with implementing more legislation to protect and preserve our safety and the safety of others, the fact remains that for every law that is passed and enacted upon, results in prohibiting citizens from making that decision for themselves or taking that choice away from us. Slowly, but assuredly, our freedoms are being whittled away, one law at a time.

That is why I am enjoy visiting places in the world, like El Salvador, where, for a brief time, I can experience the thrill of speeding down a city street or highway, with a competent, responsible driver at the wheel, and experience a childhood memory brought back to life! 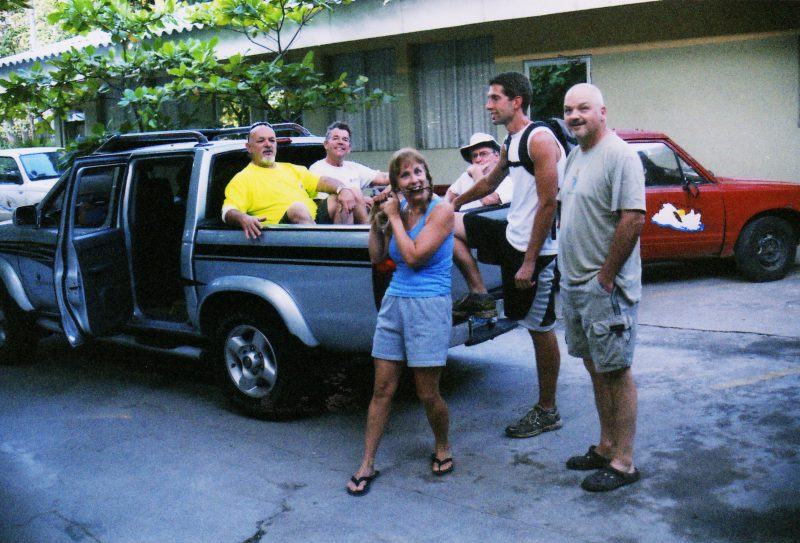 Photographs: Part of our missions group in the back of one of the pickup trucks, ready to head out from our hotel. 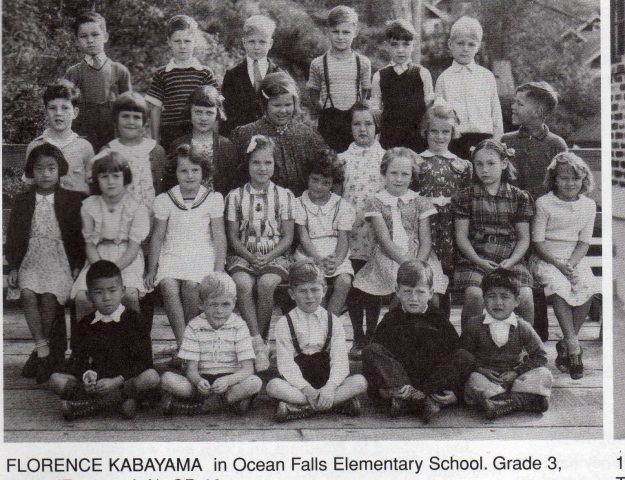 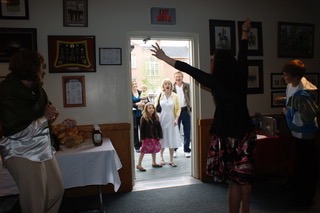 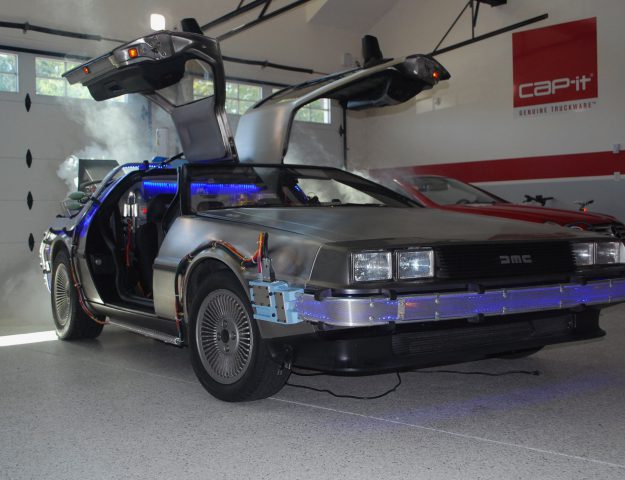